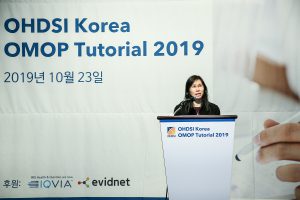 The first official OHDSI Korea tutorial was held Oct. 23 in the Grand Ambassador Seoul, and it served as an important lead event for the upcoming OHDSI Korea Symposium, which takes place Dec. 12-14 at the Konjiam Resort in Gyeonggi-Do, Korea. The enthusiasm in the room was palpable, and the energy that has been building in Korea should lead to an exciting Symposium.

While Korea first started working with OHDSI and the OMOP Common Data Model in 2014, workshops in the country had been limited to smaller Ajou University-sessions within hospitals. This was the first event that was formalized by OHDSI collaborators and open to all. There was a heavy morning focus on how to run a network study, which followed an OHDSI Introduction by Mui Van Zandt. 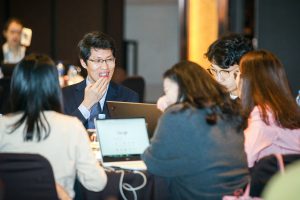 WATCH: Mui Van Zandt discusses OHDSI in Asia as part of the lightning talks at the U.S. Symposium

“The network study was impactful because we had four presenters discuss their studies and how they did them, and three of them weren’t OHDSI members,” Van Zandt explained. “They were professors who worked with OHDSI people, and they talked about their experiences. One shared both the positives and the challenges of the research. It was great because it showed you didn’t have to be an OHDSI veteran before you could start working with the tools.”

The afternoon was a more traditional ATLAS tutorial, and it was led by Seng Chan You, a collaborator on the LEGEND Hypertension Study published this fall by The Lancet. From defining questions to working with ATLAS, it turned into an active session that informed the attendees about how research in OHDSI is done, and how data within OMOP benefits their work. 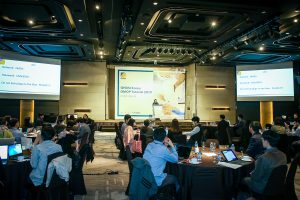 “The feedback from the tutorial was very positive,” Van Zandt said. “There is potential to hold another one next year. We’re working to figure out how to expand it, but you can feel the enthusiasm.”

You can access slides from several of the morning talks below:

Check out the recap below from this exciting and historic day in Korea.

The growth of OHDSI in Asia this fall also included several tutorials in China. You can learn more about both the Guangzhou OMOP Tutorial (Oct. 16-17) and the Huzhou OMOP Tutorial (Nov. 8) by clicking on the respective links, or by checking out the OHDSI Past Events page (which also has related materials from both events).

More big news from the fall is the official formation of the OHDSI Japan Chapter, which took place Nov. 19. Led by Professor Tatsuo Hiramatsu, MD, PhD, this chapter represents another big step in expanding both the dataset and research collaborators within the OHDSI community. The first set of OHDSI Japan Chapter members can be found below: