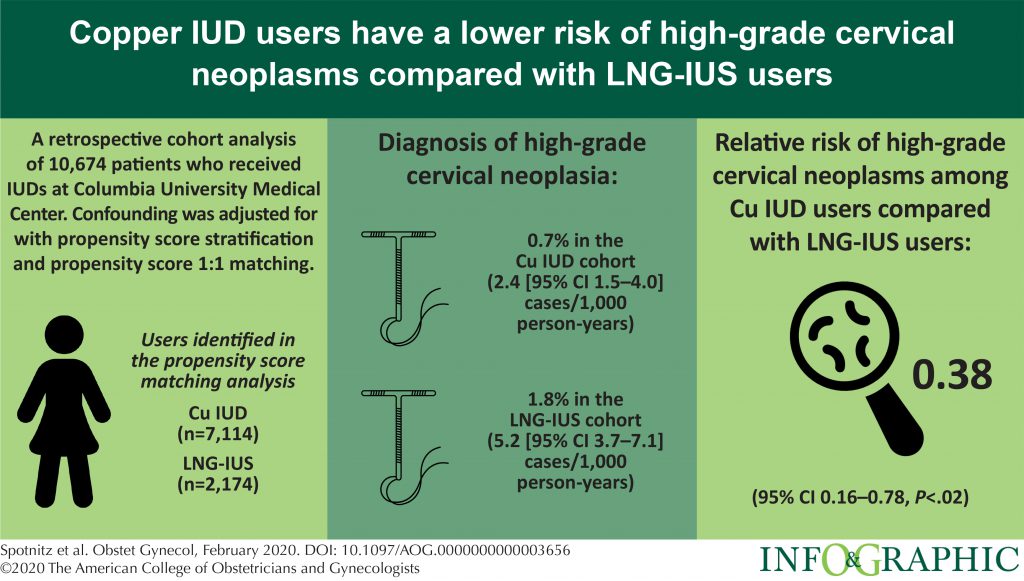 Patients who used copper intrauterine devices (Cu IUD) were found to have a lower risk of high-grade cervical neoplasms (cervical cancer) compared to users of the levonorgestrel-releasing intrauterine system (LNG-IUS), according to a Columbia study recently published in Obstetrics & Gynecology.

Studies from the 1980s suggested a reduced risk of cervical cancer among women who used an intrauterine contraceptive, though those studies did not differentiate between the varying types of IUDs. Furthermore, much of the data from those studies was collected prior to the availability of most hormonal IUDs (LNG-IUS).

By standardizing four decades’ worth of data from the Columbia University Irving Medical Center database through the OMOP Common Data Model and using high-level analytics developed within the OHDSI collaboration, the research team ran a retrospective cohort analysis of more than 10,000 patients who received IUDs.

The diagnosis of high-grade cervical neoplasia was 0.7% in the Cu IUD cohort and 1.8% in the LNG-IUS cohort.

“Copper and hormonal IUDs may have different physiological effects on the female genitourinary system,” says Matthew Spotnitz, MD, MPH, a Postdoctoral Research Scientist at Columbia and lead author of this study. “Consequently, the risk of cervical neoplasms may be different for copper and hormonal IUD users. Our findings may help patients and healthcare providers make informed decisions about whether the benefits of hormonal IUD use, compared to copper IUD use, are greater than the risks.”

Spotnitz noted that the research team hopes to lead a network study across other databases within the OHDSI network, which spans 19 countries, 133 unique databases converted to the OMOP CDM, and more than one billion patient records. For more information on the study, check out this forum post, or email him directly at mes2165@cumc.columbia.edu.

The study notes that more than 100 million women use IUDs as contraception around the world, and these findings have implications for the larger population of current IUD users.

OHDSI is an international, open-science collaborative that looks to improve health by empowering a community to collaboratively generate evidence that promotes better health decisions and better care.