The second SME certification through the EHDEN Academy took place Dec. 9-10 in Rotterdam.

As an associate professor at Erasmus Medical Center, Peter Rijnbeek appreciates the importance of a strong, effective educational program. He has been pleased with the early progress of the EHDEN Academy, a program that should provide a broad impact for the OHDSI community once it becomes publicly available in early 2020.

The EHDEN Academy, an E-learning environment developed by the EHDEN (European Health Data & Evidence Network) Consortium, was initially developed to educate SMEs (Small and Medium Enterprises) about the tools and best practices used by both EHDEN and OHDSI. There are five training courses Rijnbeek and his EHDEN colleagues felt would provide a baseline of knowledge needed to certify a support network to map a growing set of European databases to the OMOP common data model.

Though Rijnbeek believes that more courses will likely be added, these first five courses set the educational foundation for the Academy:

1) EHDEN Foundation
Provides an introduction to IMI, EHDEN, and OHDSI

2) OHDSI-In-A-Box Virtual Machine
Explains the installation and use of a virtual machine (VM) that hosts all the OHDSI tools that are discussed in the Academy.

3) OMOP Common Data Model (CDM) and Standardized Vocabularies
A course based on the full-day tutorial provided by OHDSI with additional material.

4) Extract, Transform and Load (ETL)
Discusses all the steps to map your data to the OMOP-CDM and contains several exercises to be performed in the VM.

5) Analytical Infrastructure
Explains how the OHDSI tools need to be installed, such as ATLAS. The trainees are offered an empty VM and have to install the analytical infrastructure as an exercise. 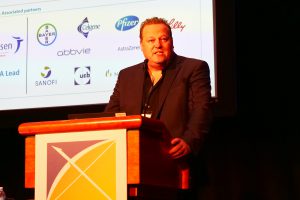 Peter Rijnbeek discussed the EHDEN Academy during the Community Evidence In Action portion of the 2019 OHDSI U.S. Symposium.

Rijnbeek, who specifically highlighted the value of the OHDSI-In-A-Box Virtual Machine course — “[it] gives people easy access to a learning environment hosting all the fantastic tools built by the OHDSI community” — credited about 10 collaborators in creating the course structure and materials, as well as Henrik John, his Erasmus PhD student, in setting up the system. There is a collection of video tutorials, training exercises, quizzes and exams that were used to both educate and evaluate these SME providers prior to a final certification process, the second of which took place Dec. 9-10 in Rotterdam.

“The EHDEN SME certification process was rigorous, and we appreciated the opportunity we had during the final project sessions to both gain insights and receive feedback from domain experts,” said Kenner Estes, of Clinerion Ltd.

“I was very pleased with how much they learned from the EHDEN Academy,” Rijnbeek said after the initial certification process (Sept. 30-Oct. 1). “For us, it was the first moment that we could really check if they got it. We used the first day to provide some additional training and interact with the trainees, and everyone was quite engaged and eager to be part of the service provider community. Some of them already prepared their press release that they were now certified.”

Training is critical to the success and growth of the OHDSI and EHDEN communities. This was the first time the certification of SMEs had been conducted internationally, and it met the needs of EHDEN in ensuring consistency of data harmonization prior to working with Data Partners. The current EHDEN Academy has been a pilot project available only to the participants involved in the opening SME call, but there are plans to open the Academy publicly in early 2020, so OHDSI collaborators — both veteran and newcomer — will be able to take advantage of these training opportunities.

“The EHDEN Academy is a unique development and serves to complement our goals in both education and community development within the project,” said Nigel Hughes, EHDEN Project Lead at Janssen. “It has been instrumental already in training SMEs, with very positive overall feedback, and we look forward to the European research community being able to access this free resource in 2020. Education is critical to ensuring high-quality evidence generation in the future.”

“I think that training should be an important focus for OHDSI,” Rijnbeek said. “We need to expand our network even further than we already have. We need to make sure everybody knows and understands how to use the tools, how to work with the common data model, and really become experts.”

There are several training materials already available to current and potential OHDSI collaborators. Face-to-face tutorials have been offered for years, and those are often uploaded to the OHDSI YouTube page. The Book of OHDSI unveiling, which took place only a couple of hours before Rijnbeek’s oral presentation on the EHDEN Academy at the 2019 U.S. Symposium, adds another source of training available 24 hours a day.

The EHDEN Academy is the next step, and it’s one Rijnbeek and colleagues are taking great care to make sure they get it right.

“I think it’s really needed,” he said. “People need to be up to speed, and things are changing fast. Many new things are happening, so how do we make sure thousands and thousands of people who are using our tools are able to keep up? Such an E-learning environment is such an important thing.

“We need to train a big community, where everybody has the book, the face-to-face training when they want it, the online training, the whole composition of training material makes OHDSI really unique,” Rijnbeek added “There’s no other open-source community I am aware of that has so much information available for their participants.”

As you would assume from observational researchers, the EHDEN Academy faculty wanted data from this first session of trainees. SME participants were required to complete feedback forms on the various courses before the certification meeting, which the faculty will use to amend or add to the current course structure. One consistent theme in the feedback was the desire for information in written form, a need that was remedied when the Book of OHDSI was released at the OHDSI U.S. Symposium.

Now that two sets of SMEs have been certified, the EHDEN leadership continues to investigate how to continue building the Academy and make it even more beneficial to a European real-world evidence community. The group was bolstered by a strong foundation from the OHDSI network, and it believes the Academy can play a vital role in the comprehensive training of a global network already making important strides in observational health research.

“We had a great start because OHDSI is a running train,” he said. “We’re not starting from the ground up. We want to leverage what is out there, and then work together to improve it. There is still so much work that can be done, but I’m looking forward to that journey. I’m convinced EHDEN will play an important role in shaping this exciting future.”