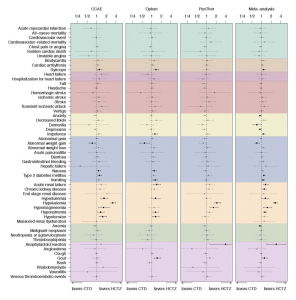 Forest plot of hazard ratio estimates and calibrated 95% confidence intervals for chlorthalidone versus hydrochlorothiazide for 55 safety and effectiveness outcomes for three databases and the meta-analysis. Confidence intervals that include 1 (no effect) are greyed. The three databases were consistent with each other, and the safety signals predominantly favored hydrochlorothiazide.

The researchers found that patients taking chlorthalidone had nearly three times the risk of developing dangerously low levels of potassium and a greater risk of other electrolyte imbalances and kidney problems compared with those taking hydrochlorothiazide. Information from the largest individual database studied by the team revealed that 6.3% of patients treated with chlorthalidone experienced hypokalemia (low blood potassium), compared with 1.9% of patients who were treated with hydrochlorothiazide.

“Doctors prescribing chlorthalidone should monitor for certain side effects in their patients,” says George Hripcsak, MD, MS, chair and Vivian Beaumont Allen Professor of Biomedical Informatics at Columbia University and lead author of the study.

The study, which looked at 17 years of data on more than 730,000 individuals treated for hypertension, is the largest multisite analysis directly comparing the two antihypertensive drugs in the general patient population.

The results were generated by the Large-Scale Evidence Generation and Evaluation in a Network of Databases (LEGEND) Hypertension study, a method for analyzing data in millions of electronic health records around the world developed by the Observational Health Data Sciences and Informatics (OHDSI) network, which has a central coordinating center at Columbia University.

An earlier LEGEND Hypertension study, published in The Lancet, found that thiazide diuretics were more effective and caused fewer side effects than ACE inhibitors when used as first-line antihypertensive drugs.

Every day, doctors and patients face a decision about which thiazide diuretic to use – and are waiting for evidence – so this high-quality study provides the best evidence so far and suggests that the one we have been using most often, hydrochlorothiazide, is better. – Harlan Krumholz, MD, SM

In the current paper, the researchers found that chlorthalidone and hydrochlorothiazide were similarly effective in preventing heart attack, hospitalization for heart failure, and stroke. However, patients treated with chlorthalidone had a significantly higher risk of side effects, including hypokalemia, which can lead to abnormal heart rhythms; hyponatremia (low sodium), which can cause confusion; kidney failure; and type 2 diabetes.

“The difference in the occurrence of side effects was striking,” says Hripcsak. “Hypokalemia, hyponatremia, chronic and acute kidney problems, along with other electrolyte imbalances, are all potentially dangerous side effects.”

“Every day, doctors and patients face a decision about which thiazide diuretic to use – and are waiting for evidence – so this high-quality study provides the best evidence so far and suggests that the one we have been using most often, hydrochlorothiazide, is better,” says co-author Harlan Krumholz, MD, SM, a professor of medicine (cardiology), epidemiology and public policy at Yale University. “Unless shown otherwise, that is the choice I am recommending. Until now I had been leaning toward chlorthalidone as many have thought that it was better, having been tested versus placebo in some of the classic studies. I didn’t expect that we would see hydrochlorothiazide to be superior in real-world practice.”

The new study is not the first to find side effects associated with chlorthalidone. A previous observational study found that the drug was associated with more electrolyte imbalances than hydrochlorothiazide.

Nearly 95% of patients in the study were first treated with hydrochlorothiazide, which was the preferred diuretic for treating hypertension throughout most of the study period (2001-2018). However, in 2017, the American College of Cardiology and American Heart Association issued new guidelines favoring chlorthalidone, based on the drug’s longer half-life and indirect evidence that it may be more effective in reducing cardiovascular risk.

“Until we have more studies directly comparing the two diuretics, we don’t really know whether the risk of the side effects seen in observational studies outweighs the potential cardiovascular benefits,” says Hripcsak, who notes that the VA Office of Research and Development is now conducting a randomized clinical trial to help settle the debate.

Hazard ratios and forest plot of the three databases and the meta-analysis for chlorthalidone versus hydrochlorothiazide on the composite cardiovascular disease outcome. The three databases showed excellent agreement.

The research team performed several sensitivity analyses (time at risk, blood pressure, dose), as well as other best practices developed within the OHDSI network (including propensity scoring and the use of negative controls) to ensure a lack of bias in the results. These best practices are used throughout the LEGEND project, which OHDSI collaborators believe will continue to impact critical decisions in health care. These analyses ensure that the compared groups are similar in severity of illness, comorbidities, baseline blood pressures, age, sex, and all other measurable variables.

“LEGEND is a novel approach that could transform the way we use real-world evidence in health care,” says co-author Patrick Ryan, PhD, adjunct assistant professor of biomedical informatics at Columbia. “Rather than inefficiently conducting bespoke analyses one-question-one-method-one-database-at-a-time, leaving us vulnerable to various threats to scientific validity, LEGEND provides a systematic framework that can reproducibly generate evidence by applying advanced analytics across a network of disparate databases for a wide array of exposures and outcomes.”

“Not only does LEGEND offer a path to scale to the real needs of the health care community,” Ryan added, “it also provides the complementary diagnostics to help us understand how much we can trust the evidence we’ve produced.”

The study was developed through tools and best practices set by the OHDSI network, a multi-stakeholder, interdisciplinary collaborative to bring out the value of health data through large-scale analytics. OHDSI is an open-science community which, through its central coordinating center at Columbia University, has established an international network of research and observational health databases. OHDSI, which has produced scores of peer-reviewed papers since its 2014 inception, develops open-source analytics tools to generate and disseminate real-world evidence.

The paper is titled “Real-World Evidence on the Effectiveness and Safety of Chlorthalidone and Hydrochlorothiazide.”