Previously known as the OHDSI Methods Library, these packages offer R functions that together can be used to perform an observation study from data to estimates and include supporting statistics, figures, and tables. The packages interact directly with observational data in the Common Data Model (CDM) and are designed to support both large datasets and large numbers of analyses (e.g. for testing many hypotheses including control hypotheses and testing many analyses design variations).

For this purpose, each Method package includes functions for specifying and subsequently executing multiple analyses efficiently. HADES support best practices for use of observational data as learned from previous and ongoing research, such as transparency and reproducibility, as well as the measuring of the operating characteristics of methods in a particular context and subsequent empirical calibration of estimates produced by the methods.

HADES can be accessed here; documentation of HADES is available in the Book of OHDSI. It has already been used in many published clinical and methodological studies, as can be seen in this Publications section. 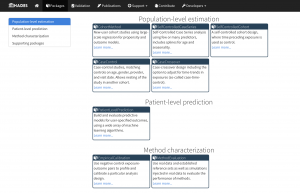 HADES includes packages for the three major types of studies generated through OHDSI collaboration (see below). Within each type are individual packages, a link is provided with more information, including instructions on how to install and use the package.

There is also a set of supporting packages (Cyclops, DatabaseConnector, SQLRender, ParallelLogger, FeatureExtraction, Andromeda) to assist with various aspects of the study process.